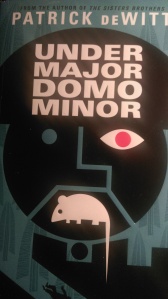 In a rash moment, I accepted a challenge to read 100 books in 2017. Afterwards, deliberating the wisdom of such a move, I realised that so much reading is almost bound to compromise the amount of writing accomplished. Hence this book, Patrick DeWitt’s Undermajordomo Minor is number seven on my tally for the year but the first I’m attempting to review.

Now I’ve headed this page “I’m Reading” but, in truth, it should say ‘I’ve just finished reading this and I think it’s worth talking about.’ And in this case, I think it’s worth talking about because deWitt has managed to overcome my aversion to anything that veers towards the fantasy or fairy-tale tradition. I’m a boring, plain-truth kind of reader, usually reluctant to tolerate an author stepping beyond the bounds of the believable, but de Witt has teetered on the border and has charmed me. (He charmed me too with a couple of smelly-old psychos in The Sisters Brothers. I ought to have expected him to pull off the trick again.)

In this novel, wrapped in a slightly surreal world, in oddly formal prose and introduced as a series of almost theatrical storytelling episodes are universal themes of love and endurance, of friendship and loneliness. There is theft, bizarre warfare and bizarre passions. There are head injuries, puppy dogs, fur-trimmed capes and tailor-made suits of clothes. Our hero Lucien, or Lucy as he instantly becomes, is at once a misfit, a misery and a brave adventurer. His trials are many, but he triumphs. Ultimately this strange, dark tale is very uplifting.

Part of me wishes for a sequel – an encore for a wonderful performance – but this glimpse into the world of the ‘eastern mountain range’ and the lives of the inhabitants of the Castle Von Aux is complete just as it is. I feel like I’ve been to another place, another time, another culture.

I guess I have.

In the library or bookshop, I have a habit.  I open the prospect at a random page – not the first and most definitely not the last – and begin to read. If the voice engages, if it doesn’t jump or wriggle away, if it doesn’t sound puerile or include elements of fantasy, and if it appears confident and competent, I may borrow or buy.

For authors whose work I don’t know, the technique serves me well enough. It’s led to one or two discoveries and relatively few failures over the years. As an adolescent, it saw me reading books with depths I could scarcely begin to appreciate. It’s led me to crime, classics, to Elizabeth Jane Howard and John Irving, and just occasionally to the book that everyone else is talking about.

I have a stubborn refusal to get swept along by a tide of excitement. I don’t want to be one of the crowd and, therefore, I miss out. Sometimes, I catch up years later. Other cultural experiences remain a mystery – I’ve still not seen ET or read a Harry Potter. It’s this thinking that has me avoiding the big prize winners. I want the discovery of a book’s treasures to be mine, not a shared event, but eighteen months ago, caught out by a frantic schedule and with a train journey ahead, I weakened and invested in Richard Flanagan’s novel The Narrow Road to The Deep North.

The train journey was long. My attention span short. I loved page one. By page five I was frustrated. At Lancaster, I put the book down. At Carlisle, I picked it up again. Chop, change, start, stop, ‘Any hot drinks’, a conversation to eavesdrop on, the Forth Bridge, a haiku, Shisui’s death poem, the temptation of the crossword. In forty pages, the author skipped me through sixty or seventy years. I wanted to be engrossed to get through the Borders, instead, I was prodded and poked, shocked and shifted. I put down the book.

This time, not on a train.

And it is worth it.

And I choose the present tense, that ‘is’ in my assessment of the novel’s worth, rather than the completed ‘was’ because I want to go back and read it again. I think it needs it. The tendency with a novel that has such a confusing and chaotic opening is that it creates, in my mind at least, a desire to make order. I want to know how the characters have arrived at their current state, and I will race through passages that simply shouldn’t be raced through, chasing down that understanding. When an event is foreshadowed, I’m on the hunt for its occurrence.  When I believe there may be a satisfactory conclusion, I’m heading there.

Enough has been written about this novel already. It has divided opinion, and on reading some of the more critical reviews, I’ll admit that I agree with some points made. Being petty, I’d also challenge the decision to avoid any speech notation as an affectation. It makes reading hard work and detracts from the quality of the dialogue. But, having said that, parts of this novel will remain with me for a very long time. I’m not sure it’s the masterpiece that some claim, but it is very good indeed.

I will go back to it. To savour it, to endure it and to stand, just for a moment, with Jimmy Bigelow and his bugle or alongside Ella, her vile candour, Sobranies and her disguise of bravery and pride.

Eclectic tastes? Well maybe, but the shift from Anne Tyler’s novel to this tale of lost hopes and dreams was easy enough to make. Gareth R Roberts is a fine writer and has written a tale that is accessible and enjoyable – even, dare I say it, to those who don’t appreciate the beautiful game. As I approach the final chapters, I’m beginning to believe that it’s going to tug heavily on my scarred old heartstrings. 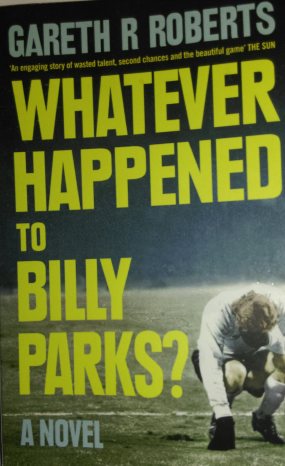 I do like football, but not in the mad, passionate way of the lifelong fan for whom the club, the badge, the legends and the heroics are all that matter. I’m more of an observer – interested, but with a level of detachment that means my weekends aren’t dominated by the scorelines.

I’ll confess that I’ve got more than a passing interest in what the author has done here. He’s placed the fictional Billy Parks in the dressing room alongside Bobby Moore. He’s on the pitch with Pat Rice, he’s bumping into Brian Clough. He’s quoting results. As my current writing project is football related, I’m fascinated by this technique. But while I’m studying the approach, I’m also reading a damned good novel.

By any standards, that’s a good result.

A few weeks ago I was privileged to hear the novelist and playwright Gillian Slovo speaking at a Manchester Literature Festival event. Towards the end of the talk, she mentioned Anne Tyler’s writing and as it’s been an age since I read The Tin Can Tree, I thought it time to check out something more recent. 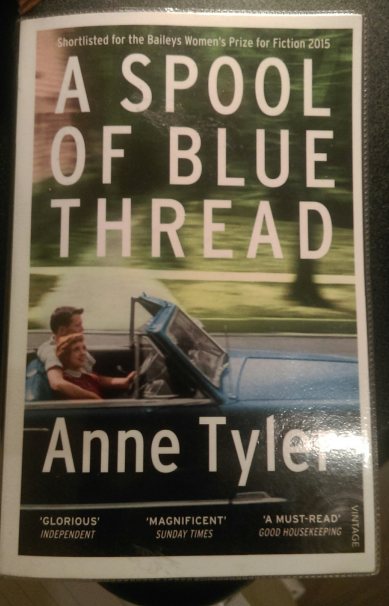 You’ll see from the reflection in the photo that the book is a library copy. I was lucky – my local lending library is a poor shadow of how it used to be, but I digress – I’m supposed to be writing about this wonderful, warm-hearted and very human novel.

It’s gentle and brutal and that takes skill. The prose is simple and the style undemanding. That makes it deceptive. It feels lightweight, but it isn’t. I can’t stop thinking about Denny, about Junior and about the teenager on the train and four-hundred-odd pages have slipped by in a Baltimore fall.

I’ve just come to the end. I’m satisfied – there are no loose ends leading to endless speculation, but I did so want there to be more.