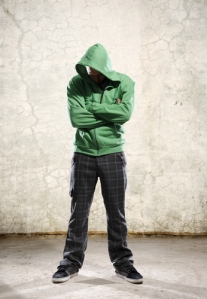 The car has been running on fumes for ten miles. If he can make it to the top of the hill, he can coast down into town. He’ll bum a tenner off Nev, stick a couple of gallons in the tank and kiss goodbye to this shit hole forever.
As plans go, leaving home in a stolen, twenty-year-old Peugeot with a fifteen-year-old girl stuffed in the boot isn’t his best. It has possibilities though, which is more than can be said about his job, flipping crud-burgers, at Banner’s. He’s been there all summer and asked for one lousy half day off, just a half day, and Banner—the bastard—had offered him the sack. Okay, maybe that isn’t quite the whole story, but right now, with an empty tank and another two miles of hill to climb, Dan’s got other stuff to be worrying about.
The way he sees it, he’s got two choices: leave her in the boot and set off walking, or let the little bitch out and get her to push. The trouble with plan B is that he can’t see her sticking to her side of the bargain.
She’s real pretty, but she’s a dirty little tart and he half hates her for that. She’s screwed Jordan—according to Jordan; she’d gone out back with Simmy at that party, and everyone knows about her and that student teacher. And Dan? Well, he reckons it’s his turn.
He can hear her kicking her feet against the back of the seats. She’s not screaming but she’s not happy. Jumped in quick enough when he said he’d get her out of school and promised a few days on their own at his mate’s cottage. So what if the cottage is a skanky caravan in the corner of a boggy field? It’s not gonna bother him is it? He’s got weed, he’s got cider and, out there, however loud she screams, and Simmy says she’s a screamer, no one’s gonna notice.
He’s almost at the top, almost ready to push this stinking shit heap into neutral, almost home free and the fumes give out. It doesn’t matter how hard he pumps the gas, he’s slowing down and there’s still two hundred yards to go and it might as well be two hundred miles. And the stupid little bitch is shouting now and, fuck me, isn’t there always an old git, at the bus stop, craning his nosey old fuckin’ beak in, just where it’s not wanted. Fuck. Fuck. FUCK!
‘Shut up,’ he snarls through clenched teeth, ‘shut the fuck up.’ But she keeps on kicking and the next thing, the old bloke, all bent forward, is knocking on the nearside window and mouthing something he can’t make out. Dan manages to hiss another warning towards the rear of the car, before leaning across and winding the window down a couple of inches. The daft old git asks the bleedin’ obvious. ‘Problem with the motor, is it, Son?’
‘Nah, I think it’s just out of petrol.’
‘Won’t be that, Son. I heard knocking. From round the back end. You must have something loose.’
He’s walking round the back, trying to crouch, trying to get them fuckin’ ancient bones down low enough to look under the car.
Dan’s desperate. ‘Just a push, Mate, that’s all I need, just a little shove, if I can get to the top of the hill, I can easy coast into town.’
The old fella’s not having it. ‘Not with my back, Son. But, if you want to push, I’ll get in and steer.’
He’s walked round, got his hand on the door handle and yes, Dan knows it’s the most brainless thing he’s ever done, but the little bitch has gone quiet and they really do need to get up this fuckin’ hill. He switches places with the old git and starts shoving and after a bit of shit over whether the handbrake’s still on, he’s finally getting, yard by yard to the top of the bastard, bloody hill.
And it’s there, at the summit, when he should be ready to ride this crazy wave back into town that Dan decides it would be an even bigger laugh to leave the old git with a bootful of trouble.
He pauses and then gives the Peugeot one hell of a shove before turning and walking back the way he’d just come.

Come in old pal, I’ve saved your place
beside me, where your loyal soul will stay,
and leaning on me, comfort find,
while mine all drains away.
I can’t be cruel, I’ll let you stay.
I’ll feed and lavish you with love
and when you leave — pray God you do —
remember where I live.

It was a short lived thing

You fall fast. Though seated, you know he’s tall. Long, strong fingers, pale against his dark suit, fair, with a hint of curl and that melancholy gaze. And the nose: that crooked, monstrous nose, and you, well, you’ve always had a thing for noses.
It’s rude to stare. You move on past, watch instead the other faces and rest your eyes on the older gentleman, the one with the complacent smile, the jowls and the grey whiskers. You look closer. He has the same name. Time, or the artist, has ruined your nose.
It wouldn’t have lasted. You walk on.